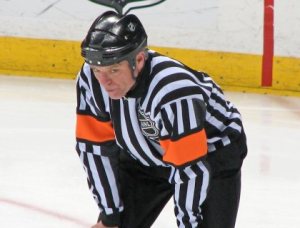 Shouldn't you want to cheer for them so that they might be more willing to call things in your team's favor?

I find it funny how many fans (especially fans of the Portland Winterhawks) complain about the referees, and how terribly they call the game. Okay, I agree that sometimes they don’t call what should be called (but, I am biased, I admit). I would like to ask the fans, have they ever attempted to call a game, much less a hockey game? Most likely no, so, in other words, back off. Complaining is going to do nothing. It’s just annoying. I also find it funny how most of the fans that are complaining, are adults. Really? I think that it’s okay to acknowledge that the game was terribly called, but, then, get over it and move on to the next game! Finally, maybe, the hit or whatever was clean and not worthy of being penalized. Be like the players (who don’t spend a lot of time contemplating the game, I mean, they do talk about it and figure out what they need to do better) and move on.